Chapman Taylor is a global, award-winning architects’ practice. Established in 1959, it now has 16 offices around the world; has done work in more than 90 countries; has won 250 plus awards; and employs 45 nationalities across their network. They are a top 40 international firm. They commissioned this project because the practice felt their true strengths were not understood by potential clients and, crucially, they appeared (on the surface) to be like any one of the other, major global players. This project started as a slow burn and gradually evolved into a full brand repositioning – brand idea and supporting messages; new visual identity and launch programme.

CREATIVE AND SUCCESSFUL PLACES AND SPACES

This was a really interesting project, mainly because – initially – the management team was not convinced that a thoughtful, structured brand strategy and main proposition was important. The project evolved over time. At the start, it involved no more than a competitor review, which revealed that Chapman Taylor looked and talked exactly like their main competitors. This convinced them that they needed to more clearly articulate their point of difference.

Many architect practices struggle with the tension between creative excellence (architecture in its purity) and commercial delivery (such as ROI or retail footfall) – buildings that follow both form and function. Since 1959, Chapman Taylor has evolved as a practice that (proven, for example, by client feedback and award recognition) delivered both creativity and commercial success.

In other words, they delivered creative and successful places and spaces. This focused idea formed the basis of their new brand positioning. It was supported by their commitment to client focus; internal and external collaboration; credible design (delivering on commercial metrics and more); and creative excellence.

The new identity was inspired by their international network. The three dimensional shape that is integral to their visual language is inspired by their global footprint (connecting the points between their offices) as well as conveying the 3D built environment in which they work. The identity also made a clear distinction between the corporate brand and the sector offers, enabling the practice to pitch for work on a number of different levels – for example as lead architect or master planner for a major scheme; as a specialist in a specific sector (driving the project or in a supporting role); or to deliver a very precise service as part of a wider group of experts.

The new brand launched off the back of workshops and presentations in Madrid and Milan, involving all 30+ MDs and senior managers across the global network. This ensured management commitment and clear presentation across their international footprint – clarity about the Chapman Taylor offer and how to communicate it. 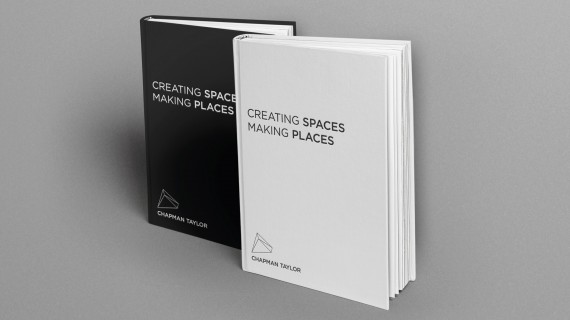